Written by Tahn Pamutto on November 14, 2022. Posted in News, Uncategorized.

It’s a common sentiment that in Buddhist circles, the most auspicious day is the day when we commit to practicing sincerely.  Nevertheless, there are a few days in the calendar that are a bit more auspicious than others.  The lunar days every fortnight are an example, where we get together to retake our precepts, meditate, and contemplate dhamma together.  One such lunar day marks the beginning of what the monks call ‘robe season’.  This is the fourth month of the rainy season, when monks traditionally prepared their robes before going back out to wandering.

This robe season found Tahn Pamutto in NYC again, staying with the Indonesian Buddhist Family.  The robe season is the time for the kathina festival, a special alms-giving ceremony where the community shows its gratitude for resident monks by offering the requisites they will need for the coming year.  Each monastery tends to have a kathina, and this allows for a great number of festive gatherings and meetings between different communities.  Yesterday was the kathina for the Indonesian vihara, and despite the chill on the air it was a heartwarming day with a good turnout!  The group was able to show their gratitude for having Tahn Santi staying and teaching through the last year and the rainy season. 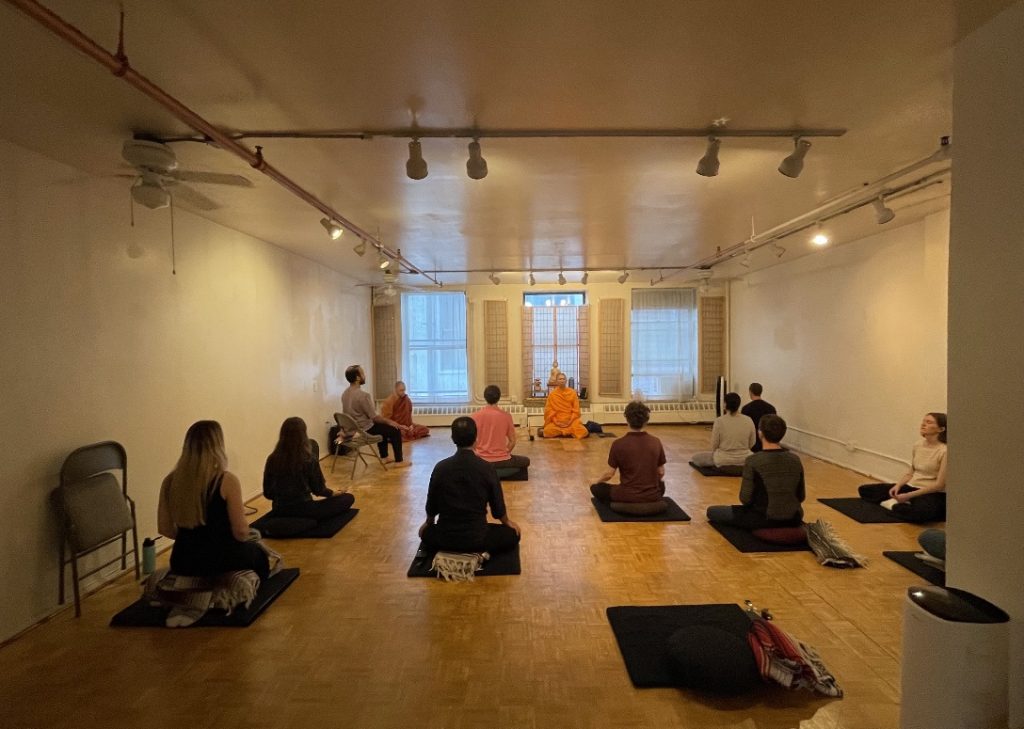 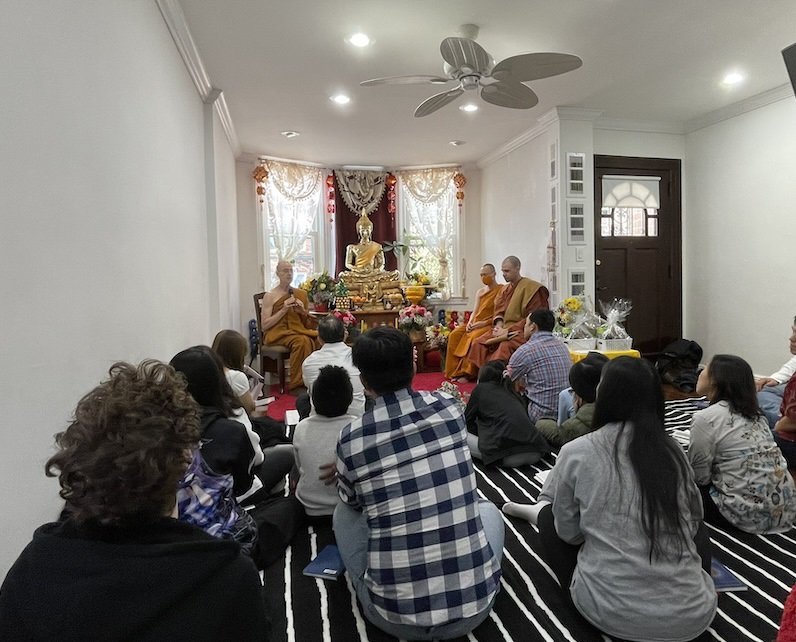 Meeting Points in the City

Written by Tahn Pamutto on October 9, 2022. Posted in News, Uncategorized.

Yesterday Tahn’s Pamutto and Santi took part in a variety of activities in NYC, including an almsround and meal in Union Square Park and co-leading an afternoon practice session nearby at the Still Mind Zendo.

These activities were the meeting point of a number of social networks.  The almsround brought together monks from a number of Theravāda temples in NYC and their respective (mostly Thai) communities.  The monastics traded numbers and invitations to visit elders, join communal meals, and do prayer walks abroad.

The afternoon session was hosted by the Buddhist Friends group.  Originally started years ago with Buddhist Insights organizing and hosting gatherings and dhamma study sessions in different parts of the city, this group has been independently active for the last year: showing it is possible for even a few people to get together and make practice opportunities happen.  That was much the scene at the Zendo itself, where a number of different smaller (and even large and long-standing) groups are sharing the space to nurture their respective communities.  One such group, www.dharma-gates.org, came after and is centered around supporting young adults in finding their way to meditation. 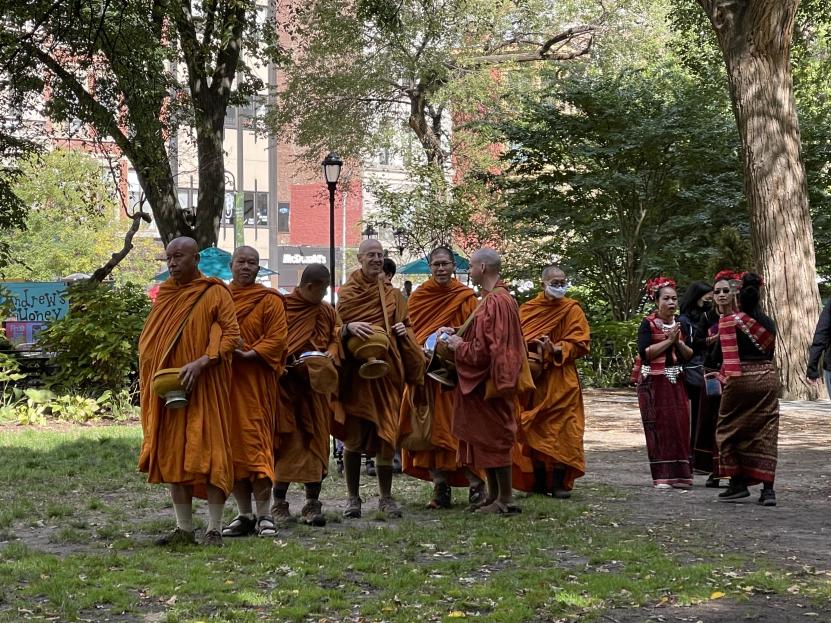 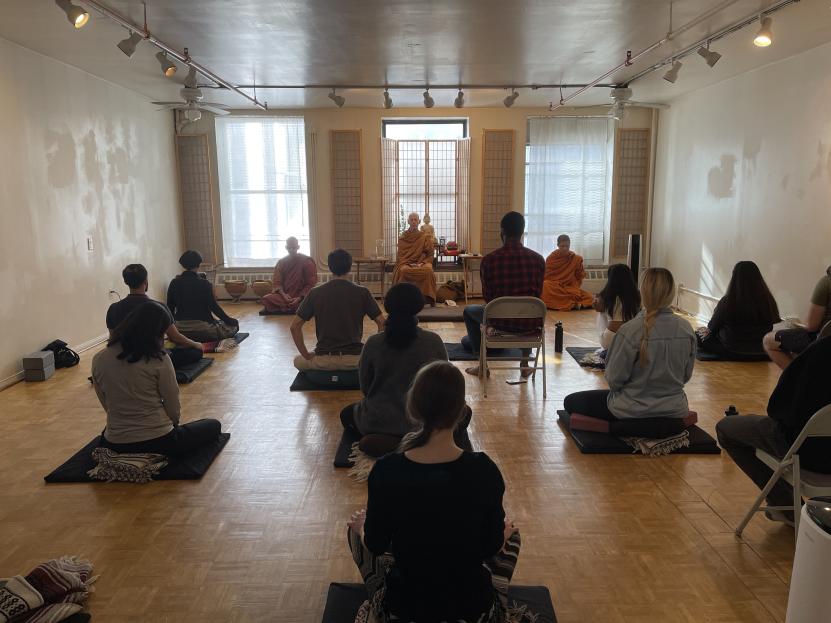 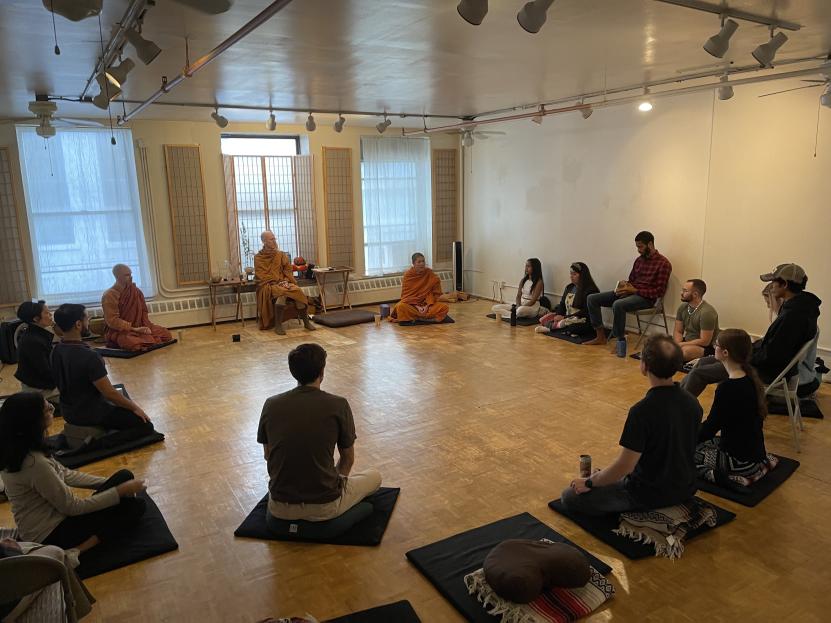 A Visual Taste of Freedom

Keep an eye on Unproductive Kammax at the bottom of the main page and at Dhamma Comics for some beautiful renderings of famous teachings, including A Taste of Freedom by Ajahn Chah and a visual tour of the Pali Canon!

Goodbye to Shelburne, For Now

Since the first of the year, Tahn Pamutto has been in residence in a spacious and well-equipped apartment generously offered in the town of Shelburne, not far from the Vipassana Meditation Center.  During this time most of the online broadcasts have come from that location and there were many daylongs and even a weeklong retreat in person.  Tahn Pamutto has now moved on from this location, and is back to a period of wandering to help scout for new opportunities in Western and Central Massachusetts.

Our immense gratitude to the owners Jonathan and Carolyn and the friends and supporters who gathered around to provide for Tahn Pamutto’s needs so that Upavana could continue to offer free dhamma programs and grow!

The previously planned Days of Mindfulness every Saturday in September will now have an in-person location of Princeton, MA.  Please reach out if you are interested to join.  Other than that, the online programs will continue much as they have, broadcasted from whatever living room or wi-fi hotspot is available.

The latest Upavana newsletter is out, a bit early for the fall season to let everyone know about upcoming events in September.

If you didn’t get the email, you can see it here:  UPAVANA FALL NEWSLETTER

You can sign up for the newsletter at the bottom of any page!

Tahn Pamutto has at last collected all the various resources gathered by the family group over the last year under one heading.  There is surprisingly little material out on the web around forming family dharma groups, so if you know anyone doing or interested in starting, pass them the link.  It can be found on it’s own page here:

The Upavana Summer Newsletter has been mailed, and can be found at:

A little over one year ago, Tahn Pamutto set off for the woods of Western Massachusetts with the hope of developing resources and community from scratch.  There was no temple to go to, nor kitchen to supply daily alms-food.  There wasn’t even a place to store extra gear out of the rain.  But there was a vast network of kind friends and supporters and plenty of people thirsty for dhamma.  Though it might take years, Tahn decided the best way to gather momentum would be to be on the ground practicing, teaching, and connecting.

We can never know how things will turn out, so it was with a vague notion of what was possible and needed that Upavana set the first fundraising goal at $5000, considered enough to support a monastic teacher for several months in a rented apartment or office.  Though summer came before the funds arrived, a camper was purchased to shelter in, a pair of grassy fields were offered to camp on, and a steady stream of generosity kept not one but three monastics fed, clothed, and bathed through a long, hot, rainy summer.

Now, after a year, that first fundraising goal has been met!  It came not through one act of giving but from dozens of sources all over the world, the majority though coming from people right in the local area supporting their neighborhood buddhist group.  Anumodana to all our friends in the dhamma!

Through faith and practice, the shelter this goal was meant to provide has come by other means, meaning much of the funds are still available to keep moving forward with programs and are ready to support ongoing projects and growth.  Because in dhamma-practice success is often a function of being able to meet opportunities when and where they arise, there’s no way of knowing what the next fundraising goal will be.  Stay tuned, as there are bound to be plenty more opportunities to practice and grow this summer!

Written by Tahn Pamutto on June 8, 2022. Posted in News, Uncategorized.

Tahn Pamutto has returned to MA and is resuming hosting the Upavana online programs – beginning with the Wednesday Tea and Meditation at 7pm tonight.

The Uposatha will be next week on June 14.

Written by Tahn Pamutto on May 25, 2022. Posted in News, Uncategorized.

Our Wednesday evening tea program is on hold for the near future as Tahn Pamutto is off traveling, connecting with friends and family.  Along the way he is mixing in events during his stops, including two weekend retreats with the Roots and Water intentional community in Mayaguez, Puerto Rico.

The Uposatha program on May 30th will still happen as scheduled.  It will be broadcast remotely from Austin, TX.  For those in the NYC area, there will be a daylong practice in Manhattan on Saturday, June 4th.  Email for details.

Tahn Pamutto is scheduled to return to MA on June 8, but it’s not clear yet how long it will take to get settled and get online programs back up.